One Retired Oregon Government Employee Gets $76,000 Every Month

Oregon made national headlines for paying one retired government worker $76, 111 every month – more than the average family makes in a year – while our schools and local governments cut back just to pay for PERS.

A $76,000 Monthly Pension: Why States and Cities Are Short on Cash

A public university president in Oregon gives new meaning to the idea of a pensioner.

That is considerably more than the average Oregon family earns in a year.

Oregon — like many other states and cities, including New Jersey, Kentucky and Connecticut — is caught in a fiscal squeeze of its own making. Its economy is growing, but the cost of its state-run pension system is growing faster. More government workers are retiring, including more than 2,000, like Dr. Robertson, who get pensions exceeding $100,000 a year.

The state is not the most profligate pension payer in America, but its spiraling costs are notable in part because Oregon enjoys a reputation for fiscal discipline. Its experience shows how faulty financial decisions by states can eventually swamp local communities.

Oregon’s costs are inflated by the way in which it calculates pension benefits for public employees. Some of the pensions include income that employees earned on the side. Other retirees benefit from long-ago stock market rallies that inflated the current value of their payouts.

For example, the pension for Mike Bellotti, the University of Oregon’s head football coach from 1995 to 2008, includes not just his salary but also money from licensing deals and endorsements that the Ducks’ athletic program generated. Mr. Bellotti’s pension is more than $46,000 a month. 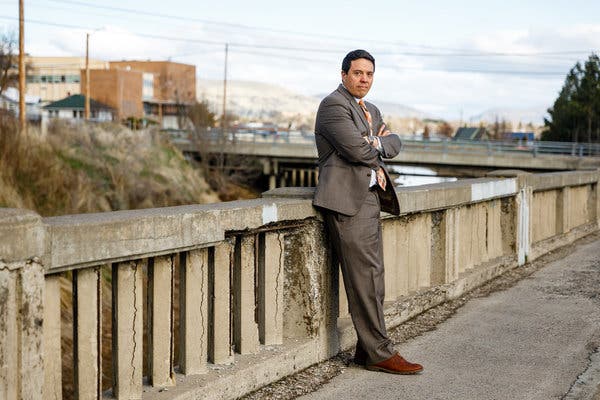 The bill is borne by taxpayers. Oregon’s Public Employees Retirement System has told cities, counties, school districts and other local entities to contribute more to keep the system afloat. They can neither negotiate nor raise local taxes fast enough to keep up. As a result, pensions are crowding out other spending. Essential services are slashed.

“You get to the point where you can no longer do more with less — you just have to do less with less,” said Nathan Cherpeski, the manager of Klamath Falls, a city of about 21,000 in south-central Oregon.

Klamath Falls’s most recent biennial bill from the pension system, known as PERS, was $600,000 more than the one before. PERS has warned that the bills will keep rising. Mr. Cherpeski has had to cut back on repairing streets and bridges.

Even as the American economy is humming, many states and cities are still hurting from the 2008 financial meltdown. The crash hammered their pension funds and tax revenues, but didn’t reduce the amounts they owe retirees.

It wasn’t until 2016 that average state tax collections returned to pre-2008 levels. In the meantime, states and cities have had to rebuild pension funds to cover the rising numbers of retirees drawing benefits. That has left less money for the police, school sports programs and everything else. Local residents might not know why, but they are paying more taxes and getting scantier services in return.

Costs are rising even in places that previously acted to defuse the problem. Colorado trimmed pensions in 2010, but a new $32 billion shortfall means more pension cuts and tax increases are likely. Detroit sliced its pension obligations in bankruptcy and persuaded philanthropists to chip in, but it is not clear that the city has an affordable plan.

In San Francisco, the school board wants voters to approve a $298 “parcel tax” on real estate, ostensibly to raise $50 million to pay teachers a living wage.

“That’s a worthy objective, but it’s not the real reason,” said David Crane, a former trustee of the California teachers’ pension system. He said the school district’s retirement costs had grown by $50 million over the last five years, devouring resources that would have gone to teachers.

Oregon is a blue state, but in its restive red hinterlands, tax increases are politically off limits and financial distress has been severe since 1994, when logging was curtailed to save an endangered owl. Lately, things have been getting even worse.

When a man was reported yelling and firing his gun on the property of a school in rural Josephine County, it took two hours for a sheriff’s deputy to arrive, said Kate Dwyer, chairwoman of the board for the Three Rivers School District.

The county has cut sheriff patrols, closed its mental health department and kept its jail at less than half capacity because of a lack of guards.

Dave Valenzuela, the Three Rivers school superintendent, traces the latest woes directly to PERS. The system is run at the state level, but it is bankrolled in large part by obligatory contributions from local governments.

This year, Three Rivers was poised to receive its first increase in state education funding in years, a reflection of growing enrollment. But Oregon raised by more than 50 percent the amount that Three Rivers had to contribute to PERS. So Mr. Valenzuela had to lop five days off the school year, ask each school to cut its budget by 10 percent and lay off the district librarian and English specialist.

PERS sets the pension bill for each entity — local government, university system and the like — based on the pay and demographics of its workers. Just about everyone’s bills are getting bigger.

That includes the state, by far the system’s biggest contributor.

Oregon now has fewer police officers than in 1970, is losing foster-care workers at an alarming rate and has allowed earthquake and tsunami preparations to lapse. A 2016 survey turned up “a large number of bridges with critical and near-critical conditions” because of “longstanding inadequate funding.”

Even prosperous communities are being pinched. The Beaverton School District, outside Portland, had to get rid of 75 teachers last year when its mandatory pension contribution rose by $14 million. That was after shedding 340 teachers in 2012.

“I have town hall meetings, and the parents are just confounded by this,” said Mark Hass, a Democratic state senator from Beaverton.

The first way was similar to what most states do, basing pensions on each worker’s final salary and years of service. But Oregon’s lawmakers included a golden touch, redefining “salary” to include remuneration from any source.

That was how Mr. Bellotti, the former football coach, came to be the state’s third-highest-paid pensioner, at roughly $559,000 a year.

When he retired in 2010 as the university’s athletic director, the standard pension formula was applied to his salary, plus a share of the outside licensing fees and product endorsements the football program brings in. (His pension details, along with those of other retirees in the system, were first obtained in 2011 from PERS by two newspapers, The Oregonian and The Statesman Journal.)

Mr. Bellotti said he never asked for a supersize pension. In 1995, he said, the university started to include a percentage of all endorsement and licensing fees in coaches’ salaries.

“It was basically to augment the university’s ability to pay a competitive salary to its coaching staff,” he said.

When Mr. Bellotti retired, he was partway through a five-year, $1.9 million-a-year contract, which he said was still below the league average of about $3 million.

PERS made up for it with a big pension. “It was pay later as opposed to paying now,” he said.

Dr. Robertson, the former Oregon Health & Science University president, said he had retired and started drawing his pension last fall, after learning he had multiple sclerosis. He said he agreed to stay on through the end of the academic year, without pay, “for the sake of continuity.”

A spokeswoman for the medical center said Dr. Robertson’s pension was based on his salary, incentive payments, clinical pay and unused sick or vacation time.

Oregon’s second way of calculating pensions dates back to 1946: For decades, every public worker got a simulated tracking account. It was credited with 6 percent of each paycheck, then left to compound at a predetermined rate.

In the early years, a low rate was used because the pension system invested in bonds that didn’t yield much.

But in the 1970s, lawmakers started nudging the rate up, eventually to 8 percent. Then, the system’s trustees decided 8 percent should be a guaranteed minimum. In years when markets produced higher returns, the accounts compounded at those rates, after money-management fees. During the 1990s bull market, accounts compounded by up to 21 percent a year.

When workers retired, their employers were required to “match” the account balances, doubling them. Then PERS would base the pensions on the total.

Randall Pozdena, an economist who supervised the pension system’s investments in the 1990s, gave speeches warning that the situation was unsustainable.

“The only way you’re going to get out of this is if the state is hit by a golden asteroid from Planet Tiffany,” he recalled saying.

But efforts to change the system, including a 1994 ballot initiative, were blocked by the State Supreme Court, which ruled that accruals could not be reduced during any public worker’s career.

So, when lawmakers required government retirees to pay Oregon’s 9 percent income tax, as everybody else did, they also increased pensions by 9.89 percent, giving retirees extra money to pay the tax with.

“It’s an affront to everybody who pays taxes,” said Bruce Dennis, a retired carpenter from outside Portland who earned a $54,000-a-year pension by swinging a hammer for 45 years. No one gives him extra money to cover his taxes.

“At every step of the way, they’ve made decisions that went against the interests of the public,” he said.

Starting in 2003, the tracking accounts were phased out. But workers who already had the accounts were allowed to keep them. New hires got a more modest retirement plan.

“The cost of this pension system is not caused by the people we are hiring today,” said Steven Rodeman, executive director of the Public Employees Retirement System. “This is a legacy problem from the 1980s and 1990s.”

For workers with the tracking accounts, PERS dialed back the annual returns to 8 percent, then to 7.5 percent in 2016. That is still more than what PERS’s investments have generated over the last decade. And so the pension fund’s financial hole continues to deepen.

Across Oregon, local officials have been told to brace for 15 to 20 more years of rising pension bills. That’s when the current generation of retirees will start dying out.

“All we can do is wait,” said Jay Meredith, finance director of Grants Pass, the seat of Josephine County.

In the meantime, mounting pension costs mean that a generation of schoolchildren is growing up in the area with no theater program, no orchestra, no wood shop and minimal sports, chorus and art.

That’s if they can get to school.

A county road recently washed out, stranding 300 people. Ms. Dwyer, of the Three Rivers School District, reported the problem to a public-works official.

She recalled his response: “I have trucks, but I can’t put gas in them to come to you and dig it out.”

I am the footer call-to-action block, here you can add some relevant/important information about your company or product. I can be disabled in the theme options.
Get In Touch
Paid for by Priority Oregon
Copyright 2017
info@priorityoregon.com
Priority Oregon is a 501c4 organization
Back To Top